It shouldn't be a surprise at this point, but I loved last week's class, like I do every week. It was fun to have a pretty self-directed class, and I really liked the creativity warmup. It was a helpful foregrounding for the self-directed portion to be able to do some basic messing around with inputs and outputs. 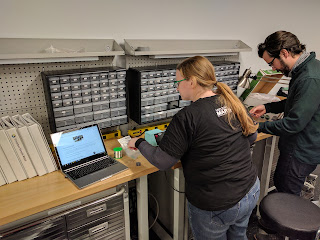 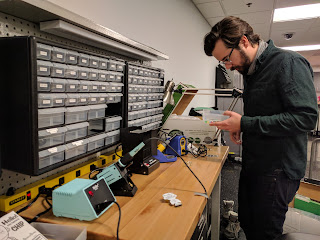 In the latter portion of the class, Stephanie, George, and I spent time working on Soldering Sunday's Chip and Buzz kits. I re-learned soldering and shared some technique tips with the others. By the end of the class, the others had taught more classmates how to solder, and we had attached some LEDs and header pins. The remainder of the projects, including the onboard microcontrollers, will be finished this coming week.

Even though I'm not the world's best solderer, I really enjoyed being able to share a little insight. And it was far more fun to make together than if I had just been working in my basement on the project. In fact, that's a consistent note from each class: I can see the value of a communal space to make in firsthand. I've been reading a lot about the value of Buddhist and Quaker practice in a communal setting, and there are more parallels than I'd realized between meditation and making. There is a special energy that comes from practicing or making in an intentional way with others who share your intention.

This week was much lighter on reading, so I added some self-directed work of my own. I enjoyed Dr. Chuck's interview with Massimo Banzi, and felt the power of Banzi's enthusiasm for the community. I can see why he's become a leader in the maker movement - he feels warm, authentic, and excited to participate. I also was intrigued by how much he really believes in openness. So many times in the maker community "open" is just a buzzword thrown around, but Banzi is a strong advocate for truly practicing openness and he can show its success with Arduino.

I also loved Becky Stern's video. She's my hero, and I'm probably going to make a button tomorrow that says "BECKY STERN IS MY HERO". She's just that cool. While watching the video and looking for Arduino tutorials, I also happened across her Internet Valentine Instructable, which is pretty cool. I found her video intriguing - my sewing skills are pretty poor, but I'd really like to try some projects combining sewing and electronics. It was obvious that the video was made relatively early on, and it doesn't have the production values of her more recent efforts.

In my self-directed work, I messed around with an ESP8266 microcontroller I bought on Amazon for $8. The ESP8266 is similar to Arduino in that there's a family of microcontrollers calling themselves ESP8266, but quality and capability varies widely. The one I am using has WiFi and microUSB, and it was a royal pain to figure out the interface at first.

Eventually, I discovered the MicroPython tutorial for the ESP8266. I knew I wanted to try MicroPython anyway, so I went ahead and flashed the chip. I had to try a few different methods to install the flashing software on my laptop (thanks, Linus) but once I had that part down actually flashing the device was easy. A few minutes later I was able to use my existing Python knowledge to blink the onboard LED in different patterns.

Next up this week: hooking up the mini OLED display and temp/humidity sensor I bought and making a tiny wireless thermometer. I also plan to solder some header pins on the two other Adafruit-branded ESP8266 chips I have, for maximum prototyping!
Posted by Will at 7:05 PM

Except where otherwise specified, the content on this blog is licensed under a Creative Commons Attribution-ShareAlike 4.0 International License.